Would you like to switch to the accessible version of this site?

Don't need the accessible version of this site?

When does "tick season" start?

In Manitoba the first ticks will be out when we have daytime temperatures above 6C. The season peaks during the first stretch of 20C+ days. At the end of the season ticks can be found as late as November.

How do I tell the difference between different kinds of ticks? 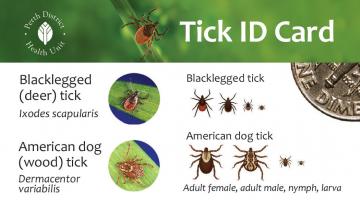 We also now have lone star ticks in Manitoba who are about the size of wood ticks ("american dog ticks") but have a distinctive white spot in the middle of their back.

What diseases can they transmit?

Of the six common tick borne diseases in North America, three are present in Manitoba:

When should I test for these diseases?

You can test any time you are concerned your dog has been exposed, but typically we will test dogs in the spring who were exposed to a larger number of ticks the previous year, or who had engorged ticks on them. These diseases may not present any symptoms initially, but all can have chronic effects. Ehrlichia and anaplasma can be cured if discovered on the test.

How can I prevent these diseases?

1) Remove ticks as soon as you find them (see below).

2) Use a prescription tick preventative medication. There are several quite effective and safe ones available now in a variety of formats and dosing frequencies. Talk to us about the options. We do not recommend tick collars as they are not effective enough.

3) A good Lyme vaccine is now available, so that may be a good idea for some dogs.

How do I remove a tick?

In most cases ticks cannot spread disease until they latch on and begin to feed for a while, so pulling them off early is important.

We look forward to hearing from you